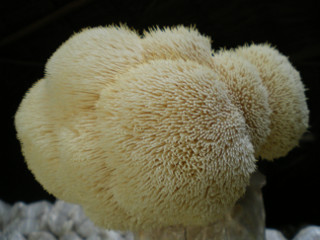 Hericium Erinaceus, also known as Lion’s Mane mushroom and Yamabushitake, has long been revered for its anti-cancer and immune-stimulating properties. Lion’s Mane or Hericium mushrooms are commonly prescribed in traditional Chinese medicine for stomach ailments and prevention of cancer. It has also been shown effective as an immune enhancer and nerve tonic, and aids in the respiratory function.

Many research done primarily in Asia found that its traditional uses aids in the cardiovascular system (lowering blood pressure and serum cholesterol) and strengthens the respiratory system, and acting as a tonic for the nervous system.

Lion’s Mane mushroom is a mushroom thought to possess the ability to improve cognitive function. The correlation is suggested because the mushroom seems to be able to stimulate Nerve Growth Factor (NGF), which may help inhibit cognitive decline.

Japanese medical research has also shown that the mushroom has the remarkable ability to stimulate the synthesis of NGF, the lack of which is thought to be one of the major causes of Alzheimer’s diseases and Parkinson disease. Lion’s Mane shows no signs of toxicity or side effects in any scientific research.