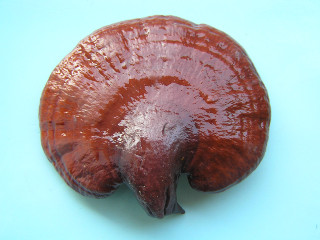 Reishi or Ganoderma Lucidum considered as the most precious and coveted traditional medicine in ancient China and Japan is believed to strengthen and balance one’s Qi or life force. Their legendary effects on health, vitality and especially as an Immune Enhancer are now well documented and supported by modern research findings.

Polysaccharides help to cleanse toxic deposit from our body; improve the natural healing ability of our body and strengthen our body’s immune system. Thus our overall health is enhanced.

Organic germanium can increase oxygen absorption rate in our blood up to 1.5 times and can also promote metabolism and thus help prevent tissue degeneration. According to the research, Reishi contains 800 – 2000 ppm. of organic germanium which is 4 to 6 times more than ginseng.

All these are indeed the main nutraceutical elements that are essential and invaluable to human health. It is a powerful adaptogen which means it normalizes all body functions. Reishi is said to empower the immune system to fight diseases and is also a powerful radical scavenger which mops up free radicals and helps the body to detoxify foreign chemicals.

Cancer is caused by an abnormal overgrowth of cells and has been reported to have one of the highest fatality rate thus, remained the top killer disease since 1981. In many cancers, the cells clump together to form solid tumors, but in some the cells are dispersed around the blood stream (leukemia) or the lymphatic system (lymphoma).

Medical reports and patients’ case histories have proven that Reishi is able to treat cancer effectively. Reishi contains Polysaccharides which fights and arrest the development of tumors, so as to prolong life.

Research also shows that Germanium exhibits the ability to help normalize the body’s defenses in cancer patients which are immuno-deficient. Elements such as Chromium, Molydenum and Nickel which are present in Reishi also assist to fight the tumors.

Case studies obtained from treatment of patients suffering from stomach cancer revealed that the usage of polysaccharides together with cytotoxic drugs have substantially improved and increased life prolongation.

The liver is the main metabolic organ in the body, involved in the carbohydrate, fat and protein metabolism and it is also one of the major detoxification organs. Liver disease is a serious condition and there are various other conditions for which liver disease is a risk factor.

Polysaccharide contained in Reishi can improve the body’s immunity such as acute hepatitis and chronic hepatitis caused by viral infection. When Polysaccharide and Germanium are used together, they can effectively control the spread of cancerous cells in the liver. Germanium is also good for blood circulation, where poor blood circulation is caused by the obstruction of gall and over-accumulating of bile. It is able to neutralize toxins, thus reduce the damage to the liver due to drinking and chemical poisoning.

Reishi can minimize the damage of the liver brought about by viral infection, enhance the liver’s metabolism and regeneration and promote the formation of protein.

For High And Low Blood Pressure, Thrombosis And Arteriosclerosis

High blood pressure, also known as hypertension happens when blood is forced through the heart and blood vessels throughout the body with greater force than is necessary. Over time, this will damage the heart and vessels which eventually will lead to life-threatening health problems such as heart diseases and strokes.

Reishi can strengthen the constitution which is caused by kidney disease, brain tumor, cerebrovascular diseases, arteriosclerosis and arthritis through the combination of polysaccharides and germanium. Germanium is effective not only for the cleansing of blood but also strengthen blood vessels, prevent thrombosis and extravasations of the blood palettes. Germanium can also increase the metabolism of the body and oxygenation which can counter defective metabolism that causes high blood pressure.

Reishi is also able to adjust and normalize the secretion of endocrine level in our body thus eliminating endocrinal diseases which can lead to high blood pressure.

People with diabetes have difficulty in processing glucose which is a sugar that the body needs for energy. This will result in blood glucose being trapped, causing blood glucose to rise. Diabetes can lead to various complications such as poor wound healing, higher risk of infections, and many other problems involving the eyes, kidneys, nerves, and heart.

Polysaccharides and Germanium contain in Reishi helps in the removal of excessive nutrients and toxins in the body which can counteract obesity which is one of the causes of diabetics. Germanium can also eliminate other causes of diabetics such as viral infection, anxiety, wrong use of hypertensive or diabetic drugs and insufficient blood in the pancreas.

Hemorrhoids happens when blood vessels are swollen in and around the anus and lower rectum that stretch under pressure, similar to varicose veins in the legs. Although hemorrhoids are definitely irritating and sometimes debilitating, they can be prevented by healthy diets, avoiding toilet straining, and other lifestyle changes. The causes of hemorrhoids include pregnancy, heredity, aging, and chronic constipation or diarrhea.

Reishi contains Germanium that can help in the excretion process which directly prevents constipation and diarrhea. It also contains Titerpene compound which can cleanse the intestines and improves one’s appetite, thereby adjusting the eating and sleeping patterns. Reishi also contains nucleoside compound which helps to improve metabolism to aid in the healing of haemotamia .

Acne is a common skin condition where red, inflamed pimples (known as papules and pustules) and non-inflamed pimples (known as comedones) appear on the skin. Often, these pimples appear on the face, but are occasionally also found on the chest and back. The main causes of acne include unhealthy food, lifestyle, anxiety, exhaustion, alcohol, imbalance of hormones during adolescence or cosmetic reaction. Reishi improves the function of the liver lower oil secretion level, remove excessive sugar and fat. Thus, Reishi can improve the condition of acne and skin appearances.

Insomnia is a sleep condition where people face difficulty in sleeping. People with insomnia have one or more of the following symptoms; difficult to fall asleep, waking up often during the night, waking up too early in the morning or those that toss and turn and get unrestful sleep.

Consumption of Reishi have an apparent effect on insomnia with high success rate. Taking Reishi for a period of 10 to 15 days will show improvement of sleeping and eating patterns, increase in body weight, decrease in and even curing heart palpitation, headache and nausea. For insomnia caused by illness such as chronic bronchitis, coronary heart disease, hepatitits, and high blood pressure, consuming Reishi helps to improve such illness.

An allergy is a specific immunologic reaction to a normally harmless substance, which does not bother most people. Most people who are often allergic are more prone to more than one substance. However, common to all allergies is the excessive secretion of histamine, a reaction substance. Arresting this bio-chemical stage is crucial to hinder any allergy to occur. Research has shown that Reishi is capable of restricting the production of albumen which is responsible for the secretion of and the irritation causing histamine.

In addition to the above medical conditions, Reishi has proven also to be effective treatment of the following :-

DISCLAIMER: The material here could include technical inaccuracies or other errors. We are not in a position to accept any liability should the content not be correct. The information and opinions provided are for general information only, and should not be taken as advice to you. It is always best to seek professional medical attention on an individual basis for your particular circumstances. Always seek professional medical opinion where needed and where symptoms are persistent and chronic.